This page is having a slideshow that uses Javascript. Your browser either doesn't support Javascript or you have it turned off. To see this page as it is meant to appear please use a Javascript enabled browser.

In the cosmic battle of Illustrator vs Photoshop, who would win? Well, like most superheroes both programs have their strengths, weaknesses and super-powers. And like the worlds of DC and Marvel, both programs are most comfortable within their own environments. Occasionally, however, the two worlds collide. To drop the metaphor, there are two types of graphics programs – the difference being how they store their digital data. Illustrator is a vector-based program which means that data is stored as mathematical formulas, which is the best mode for storing illustration-type graphics. The screenshot here has Superman as a bitmap image and Spidey as a vector-based image. (The image itself, created in one of our courses, was created using a combination of both programs.) 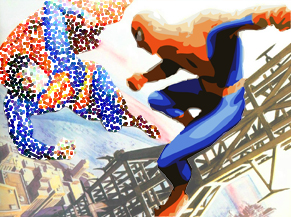 An example of some vector artwork: an A4 image consisting of a black circle on a white background. The computer stores this using some binary code to represent the sizes of the circle and page, some code representing the centre and radius of the circle, and some code representing the thickness and colour of the circle. This is a very small string of data, hence Illustrator files are usually small in size. They are also known as resolution-independent since they can be scaled up or down and will not lose any clarity of image. Vector files are great for logos, illustrations and diagrams, as well as text.
Photoshop images, on the other hand, are pixel-based. Also known as bitmap or raster imagery. Superman here is a pixel-based image. In the same case of the black circle on a white background, a pixel-based file will store the data as a map of bits of information, or a grid of pixels. Each pixel has a number for colour and brightness, and so the software stores the data as a very long string of binary numbers. Hence Photoshop files can be very large in comparison to vector files. But bitmap files are the better choice for photographic imagery, also known as continuous tone. Resolution is an issue though, being stored as pixels per inch (ppi). Lower res images are fine for web (72 ppi), whereas print media require high res images (300 ppi).
Both programs were created by Adobe and have been the industry-leading software in their respective fields. So there is no definitive answer to who would win the battle of Illustrator vs Photoshop. They work best as a team!
See many examples of our Illustrator and Photoshop clients’ work on our Facebook site.
Other related Illustrator Blog Posts:
Illustrator workspace
Illustrator basics
Illustrator clipping masks
Illustrator brushes